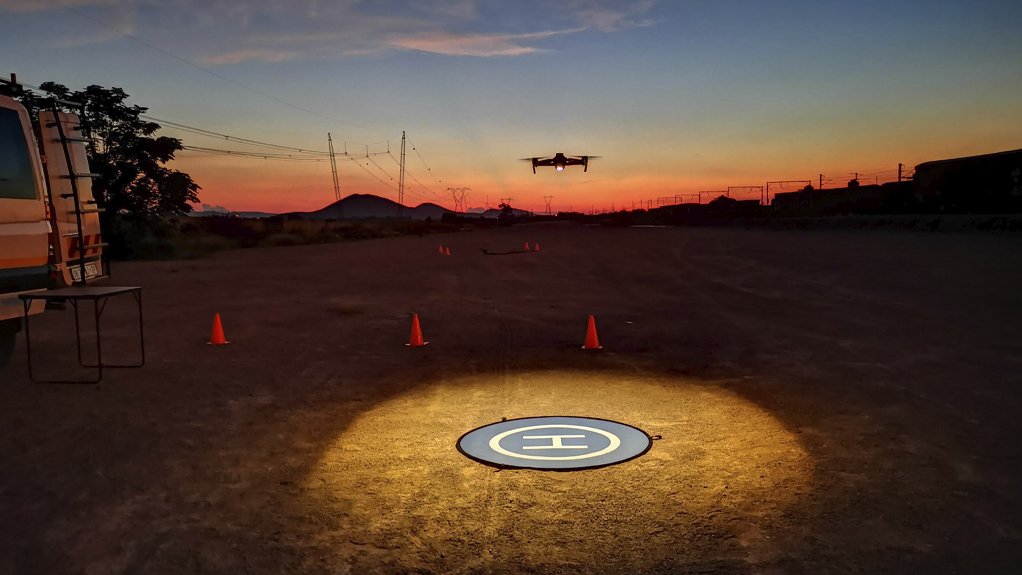 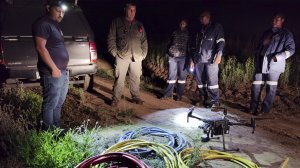 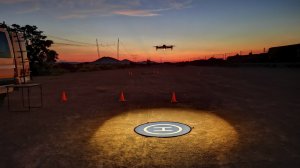 UAV & Drone Solutions provides eyes in the sky, day or night, to deter infrastructure criminals and identify areas of concern
A UDS drone near rail infrastructure uses its spotlight to illuminate a landing pad

Cable theft for SOEs like Transnet, Passenger Rail Agency of South Africa (PRASA) and Eskom has a significant negative impact on the operators’ ability to transport people and goods; as well as to provide electricity.

However, it is well known that since the Covid-19 pandemic hit South Africa, many rail services were rolled back or halted as the country enacted strict lockdowns. During this time, criminals looted unguarded overhead and underground cables on Transnet and PRASA’s rail lines, resulting in electric locomotives being unable to operate.

During this time, actual rail lines were also removed, mostly to be sold to scrap metal merchants.

In the 2021/22 financial year ended March 31, Transnet recorded cable losses as a result of theft in excess of 1 000 km – an all-time high and up from the 700 km lost in the previous financial year.

As a result, Transnet is spending R1.6-billion on security in the current financial year, as well as a further R400-million on replacing stolen cables.

UDS co-CEO and co-founder Otto Werdmuller Von Elgg says the company has, since taking on rail infrastructure surveillance jobs, noticed that underground rail cables are stolen for subsistence purposes, resulting in small volumes of cable being stolen at a time.

However, the theft of overhead rail cables is mostly fully syndicated, and a professional operation with several kilometres and truckloads of cable being stolen by teams of criminals with each occurrence.

“Railway cable theft is not a ‘challenge’, it is a crisis,” he says.

As of late, cable theft-impacted trains are left idle with the commodities they were supposed to carry being moved by other means – mostly by truck to South African ports, but increasingly to foreign ports, such as through Mozambique. Using trucks and foreign ports significantly elevates logistics costs and risks though, UDS co-CEO and co-founder Georges Sayegh points out.

To help government departments, SOEs, mines and industrial facilities secure their infrastructure, UDS offers its extensive fleet of drones and field personnel, who are able to access remote locations and pursue criminals, even at night.

Werdmuller Von Elgg tells Engineering News that because its technology has been deployed to fight cable theft syndicates for many years, UDS has built up significant capability in deterring such criminals.

“Generally, without exception, wherever we go, we have a reduction of at least 90% of cable theft, on multiple clients over 90 sites around the country,” he says.

Using drones at night has proven to be a most effective method in deterring cable,  infrastructure and diesel thieves. This is done using thermal imaging cameras on various types of drones.

Multirotor models offer vertical take-off and landing, as well as hovering capability, thereby necessitating rapid deployment and quick recovery; but are hindered by their short range. Alternatively, the fixed-wing variants can be launched by hand, but offer extended range.

UDS manufactures between 70% and 80% of its drones at its Johannesburg facility, where it also trains pilots, conducts repairs and maintenance, undertakes logistics through a 24/7 facility and manages the business.

Because certain intricate components can cost a lot, UDS has also developed three-dimensional printing capabilities to manufacture drone components quicker and cheaper than buying them from original equipment manufacturers. This capability also enables UDS to prototype, develop and refine its aerial technology.

In terms of its deployment capacity, UDS has 250 drones and as many operators, with a fleet of vehicles and supportive administration staff. This enables UDS to move quickly on security-related matters between various areas in South Africa to identify hotspots.

Currently, UDS teams jointly fly about 5 000 to 7 000 hours a month, with 90% of this being for security work. The other 10% is for stockpile management, engineering services and infrastructure inspection.

Besides undertaking work for Transnet, UDS also assists mining companies with monitoring vulnerable infrastructure, thereby ensuring such companies can get their products from mine to port without security-related incidents, delays or losses.

“In retrospect, [2013, when UDS started,] was a very interesting time because we were allowed to fly the kind of missions that [no-one] else in the world [was] allowed to fly, other than [for] military [purposes].

“We are allowed to fly at night, [in a] 25 km [radius] with no lights, 1 600 feet above ground level – which is really the domain of military [operations],” says Werdmuller Von Elgg. These operations were done in game reserves to combat wildlife crime, especially rhino poaching.

However, in 2015, with the Part 101 regulations promulgated by the South African Civil Aviation Authority, UDS was effectively grounded for a short time while it got its legal paperwork in order.

Within a few months, UDS was licensed and legally allowed to operate again. At this time, several commercial clients, seeing what UDS was capable of, approached the company in 2016 to help them address cable theft issues.

“We started there the next day,” he says. By using drones, UDS reduced the security personnel complement at this site from about 200, down to about eight guards, as well as reduced incidents of theft down to 5% of what they were before UDS was involved.

He says most rail- and infrastructure-related criminal activity takes place at night. “The criminals think they cannot be seen, so they behave differently at night. We fly above them. We are unseen, unheard and we are incredibly effective to directing the [ground] troops [to their location],” he says.

“We have had thousands of arrests, probably every single day. [Drones are] the only technology that is viable if these criminal activities are happening at night,” says Werdmuller Von Elgg.

Sayegh adds that, because UDS operates in the air unannounced, and from different areas, criminals have a difficult time knowing when they are being monitored. This also serves as protection to UDS operators.