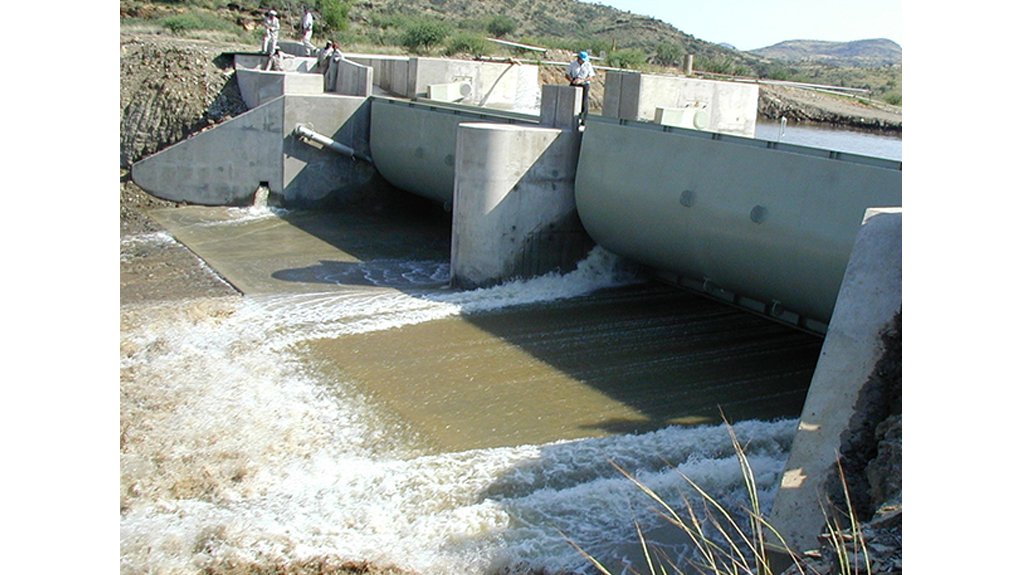 The self-automated scour gate is a technology which has been developed and refined by local water engineering contractors Amanziflow Projects to promote water security.

Amanziflow Projects MD Peter Townshend says many projects have been conducted by the company in the Southern African Development Community.

“The installation of a scour gate by Amanziflow Projects generally starts at the design phase, but such a gate can be retrofitted to an existing dam, should the need arise.”

He explains that a scour gate is used when a river and its tributaries move a substantial amount of silt or sediment during floods, which can eventually fill up most of the dam and decrease much of its storage capacity.

These scour gates can also be opened manually to sluice out sediment in smaller dams by drawing down the water level to flush the dam and then allowing for it to refill and then repeating the process of flushing to obtain the required result.

The scour gate is used effectively in river offtakes to pumpstations, canals or penstocks to remove sediment, and is a valuable flood-routing gate to redirect floods.

“Water storage capacity in South Africa is decreasing when we are an already water-scarce country that suffers from debilitating long droughts, which are usually followed by high-intensity rainfall and extensive flooding,” Townshend points out.

Based on data provided to Amanziflow by the Department of Water and Sanitation (DWS), about 11.5% of South Africa’s design capacity in dams has already been lost to siltation.

Townshend says the expectation is that as much as 20% of South Africa’s dam storage could be lost within the next ten years. This is equivalent to losing the volume of a large dam – which could hold about 100- to 150-million cubic metres – to siltation every year.

“Many dams are almost fully silted and are no longer used as storage dams, with a considerable loss of capital expenditure such as Shongweni and Gilbert Eyles, in KwaZulu-Natal,” he illustrates.

Further, South Africa has an approximate design capacity of 33.6- billion cubic metres of water stored in 575 large reservoirs. This storage is at risk, as demand for water increases and climate change is taking its toll, in the form of extended dry periods and high evaporation, as well as floods which carry large quantities of sediment into the dams

South Africa already uses about 95% of its water resources, which are captured in more that 5 000 registered dams, according to DWS.

There is, therefore, not much water to store in new dams and Townshend suggests that there is little point in constructing new dams.

He adds that a new dam is a large capital cost expenditure in terms of not only the construction of the dam but also the compensation for the loss of land that will be inundated with water and on which the dam will be built. It also has further implications in terms of relocating people and graveyards, as well as inundating fauna and/or flora.

“The country has to use its existing dams to try to gain – or regain – extra storage from sedi- ment deposition to meet the growing demand for water,” concludes Townshend.