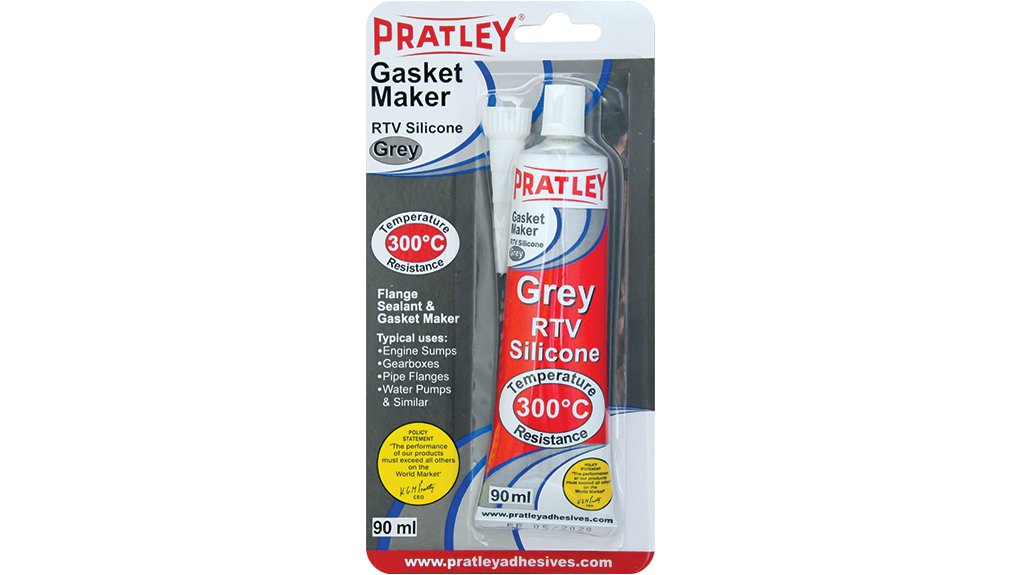 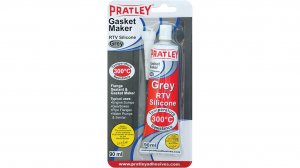 SENSOR SAFE Pratley’s Gasket Maker is a room-temperature-vulcanising silicone that does not contain acetic acid, which attacks the brass and copper components in vehicle sensors

The demand for adhesives manufacturer Pratley’s new flange sealant and gasket maker has been so positive that the company had to “dramatically revise” its stock levels since its launch in February this year, says national sales manager Mark Bell.

Pratley’s Gasket Maker – described by the company as a tough, grey, elastic silicone for superior sealing – “has been so well accepted by the market that its current market share trajectory points to it being a dominant brand before year-end”, he tells Engineering News.

He further notes that the product – for application on engine sumps, gearboxes, pipe flanges and water pumps, among other automotive components – was introduced at an attractive price point, while not compromising on Pratley’s performance and quality standards.

Distributed by motor spares wholesalers, Gasket Maker is available at retail outlets across the Southern African Development Community, and other African regions. It will also be made available in Australia, Europe, the Middle East and the US through Pratley’s distributors.

The company developed and introduced Gasket Maker, a room-temperature-vulcanising (RTV) silicone, to its adhesives range in response to an increasing demand from the automotive sector, which represents a significant portion of Pratley’s adhesives business.

“One of the unique properties of Gasket Maker is that it is ‘sensor-safe’. Unlike ordinary silicones, which contain acetic acid, the product has no adverse effects on electronic sensors and components,” Bell says, adding that this is especially useful in the automotive market

Available in a 90 mℓ tube with a nozzle for ease of use, Gasket Maker is also chemical resistant to petrol, diesel, paraffin, water, oil and antifreeze.

The product can withstand temperatures from –50 ºC to 300 ºC, although it is not recommended for areas, such as engine manifolds, where it will be continuously superheated. But, Bell notes, Gasket Maker can withstand higher temperatures than most generic epoxies and acrylic adhesives.

This year, Pratley embarked on Phase 2 of its latest research and development (R&D) drive, which will focus mainly on new product launches.

“Having patented more than 350 products worldwide, Pratley is no newcomer to R&D,” Bell tells Engineering News.

R&D is Pratley’s backbone, he says, noting that there are always products in the pipeline, with the company launching three or four products across its adhesives, electrical and minerals departments every year.

He highlights that the company’s inventions can take up to four years of testing before they are released onto the market.

Pratley has invested in the latest equipment for its adhesives R&D laboratory and has started a hi-tech machinery upgrade of its adhesives factory in Krugersdorp.

This follows on from the commissioning in 2017 of a high-end electrical testing laboratory focused on the IEC 60079 specification for hazardous environments.

“Innovation remains at the core of our business. Our new RTV silicone Gasket Maker is an example of a refinement of our product range to cater for specific end-user requirements, enabling us to tap into a diverse range of niche markets,” highlighted CEO Kim Pratley in a March press statement.