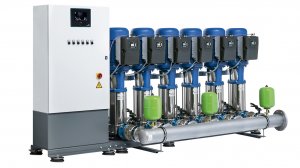 The South African division of global manufacturer KSB Pumps and Valves this year announced the introduction of its KSB Delta Macro series to the local market.

The series is designed for large flow rates, with a maximum rate per unit of about 960 m3/h and a maximum pump head of 160 m standard.

Additional application potential of the series lies in larger property developers, as the system is also designed to cater for high-rise buildings, large data centres, office parks and hotels, as well as firefighting applications in large retail properties.

The systems operate automatically and are equipped with between two and six KSB Movitec high-efficiency centrifugal pumps.

KSB Pumps and Valves Building Services manager Shawn Wessels explains that the system’s microprocessor control unit starts and stops the pumps in line with demand using either cascade control or a frequency inverter for speed control.

He adds that light-emitting diodes on the control panel indicate the system's current operating status.

An industrial protocol system, known as the Modbus remote terminal unit interface, is provided as standard and assists with the connection to external communication devices.

For transmitting warnings or alerts to a higher-level control station, the standard configuration has two volt-free contacts on the terminals, in addition to other optional signal terminals.

“The pressure booster system can be connected to the KSB Delta FlowManager app using a Bluetooth low-energy interface,” explains Wessels.

The application shows the status of the pumps, the pressures on the suction and discharge side, and the programmed parameters.

It also enables users to control and operate the system directly and change the settings.

“When water consumption stops, all pumps are ramped down one after the other once the stop-pressure has been reached,” he adds.

This ensures that the individual pumps operate only in line with actual demand.

If a pump has not been operated for more than 24 hours, the microprocessor control unit initiates a test run for this pump.

“Should a lack of water occur in the inlet, the system stops automatically to prevent damage caused by dry running,” says Wessels.

The systems are based on designs from Germany and Holland and built in South Africa.

After the factory assembling, all systems are tested before being dispatched to the client, so all clients have the systems delivered and ready to connect.

This makes commissioning easy and fast for the service personnel, he adds.

Additionally, the installation of shut-off valves downstream and upstream of every pump means that replacing a pump does not require the piping to be drained beforehand.

All parts in contact with the fluid handled are made of stainless steel or brass. The sealing elements are made of ethylene propylene diene monomer, or EPDM, that has been approved for drinking water, ensuring corrosion resistance and a long service life.

Wessels points out that after the introduction of the Macro series to the South African market, will establish the additional assemble outlets in Sub Saharan Africa – Angola, Kenya, Nigeria where there is a demand.