MBSA hands buses over to the City of Johannesburg

By: Anine Kilian     22nd November 2013 The City of Johannesburg received 134 buses for its Rea Vaya Phase 1B in October from the the Daimler group of companies, a subsidiary of Mercedes-Benz South Africa’s (MBSA’s) Bus Rapid Transit (BRT) system, Mercedes-Benz bus and coach brand manager Dirk Ansorge announced at the Johannesburg... →

By: Anine Kilian     22nd November 2013 Diesel truck manufacturer Hino South Africa’s truck plant, at the Toyota South Africa Motors manufacturing complex in Prospecton, near Durban, will be relocated to a nearby site during the plant shutdown at the end of the year, Hino South Africa VP Dr Casper Kruger announced last month at the... → 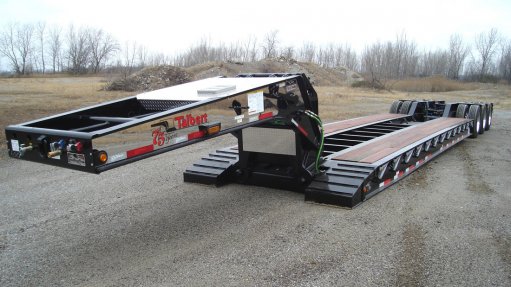 By: Carina Borralho     23rd August 2013 Measuring vehicle fuel-tank levels using the “Tank-I” system has proven to be a successful solution, as it enables fleet operators to monitor, manage and, ultimately, protect their fuel, says process control instrumentation and industrial electronics company Instrotech. “With the ever-escalating... →

By: Carina Borralho     23rd August 2013 An exhibition displaying 65 trailers, of which 15 were different derivatives and many were new designs, was held in July to demonstrate Alf Finn Road Industrial Trailers’ (Afrit’s) ability to deliver products to suit specific customer requirements. “This event was different from others as it... →

US company brings lightweight truck side skirt to SA

By: Carina Borralho     23rd August 2013 US-based trailer aerokits company Freight Wing plans to launch its range of aerokits in South Africa with its local partner, designer and manufacturer of fibreglass refrigerated and dry freight vehicles Serco, following its success in the US market where it has supplied in excess of 100 000... →

23rd August 2013 Manufacturer of braking systems for rail and commercial vehicles Knorr-Bremse has won the title of best brand in the commercial vehicle sector brakes category of the Euro Transport Magazine awards for the eighth time in a row. →

23rd August 2013 Polson Vervoer, which hires tippers, water tankers, graders and rollers reports that since acquiring its first Powerstar truck eight years ago, it now has 20 in its ever-burgeoning fleet and is pleased with its performance. The company says that nearly half of its entire fleet carries the... →

By: Carina Borralho     23rd August 2013 Over the last three years, a significant percentage of Reef Fuel Injection (RFI) Services’ budget allocated to investments has been spent on acquiring new technology to increase its competitiveness. The Germiston-based company, which is the accredited service and warranty centre to diesel fuel... →

23rd August 2013 Renault Trucks reports that it has conducted the most stringent testing programme in its history on the open road and at its La Valbonne test centre site in France. The first deliveries of the new truck range will be made to customers at the end of September/early October. →

By: Zandile Mavuso     23rd November 2012 Rising imports of trailer kits from the Far East and labour unrest in the South African mining sector are impacting negatively on the demand for steel from local truck trailer original-equipment manufacturers (OEMs), states Robor Baldwins, a division of the Robor group.  →

By: Zandile Mavuso     23rd November 2012 There have been some drastic changes in the commercial vehicles sector in the last decade and the number of underwriters operating in this sector has grown from 9 to about 26, reports truck insurance underwriter specialist Heavy Commercial Vehicle Underwriting Managers (HCV). →

By: Anine Kilian     24th August 2012 Rolling bearing manufacturer SKF has developed its new Bus Door Actuator as part of the company’s BeyondZero portfolio initiative, which is a strategy aimed at having a positive impact on the environment. The SKF Bus Door Actuator saves 1.9 t of carbon dioxide emissions a year, compared with a... →

By: Anine Kilian     24th August 2012 Commercial trailer manufacturer Paramount Trailers has signed a business agreement with truck dealer Imperial Used Trucks, which makes it the official commercial trailer partner for the truck dealer. The agreement, which was finalised in May, resulted in a variety of consignment commercial... →

24th August 2012 Kempton Park-based transport company G&H Transport and Repairs has become the latest member of the Chemical and Allied Industries’ Association (CAIA) to sign the Responsible Care public commitment. The company transports a diverse range of dangerous goods throughout South Africa, as well as... →

24th August 2012 Germany-based vehicle manufacturer Scheuerle has, along with its sister company Nicolas, in France, developed a new type of semitrailer featuring hydraulically movable axles. Along with the standard Superflex trailer version, single-telescopic and double-telescopic models are also available. →

24th August 2012 For optimum safety on the roads and during the loading and unloading of materials, it is critical that drivers have a clear vision, not only of what is in front and behind the vehicle, but also of what is on either side of the vehicle, says automotive components manufacturer Stirling Accessories... →

By: Anine Kilian     24th August 2012 Spring manufacturer, Springwell reports that several large export contracts by vehicle manufacturers are under way, which is positive for the South African economy and automotive component suppliers. However, as the scale of these projects increases, so does the competition between component... →

By: Sinette Goosen     18th November 2011 Owing to a significant increase in the sale of commercial vehicles, Hyundai Automotive South Africa (Hasa) reports that it is shifting its focus to improving the fundamentals of its specialised Hyundai Commercial Vehicles division to avoid outgrowing its service capabilities too quickly. →

18th November 2011 Manufacturer and refurbisher of commercial trailers Paramount Trailers plans to increase its market share by investing in a new manufacturing plant. →

18th November 2011 The South African Board of Jewish Education’s concern for the safety of its students informed its decision to replace the bus fleet used for transporting pupils of the King David schools in the Johannesburg area. →