13th May 2021 Creamer Media's Chanel de Bruyn speaks to Engineering News Editor Terence Creamer about a new Negotiated Pricing Agreement (NPA) between Eskom and the Hillside aluminium smelter, what the process will be for Nersa to adjudicate the NPA and if there are likely to be more such NPAs with other... →

By: News24Wire      12th May 2021 The National Union of Mineworkers (NUM) has disputed claims by Eskom in a statement that the average salary of an Eskom employee stood at R737 000 per annum, contending that employees negotiating their salaries at a bargaining unit could not earn more than R650 460. The union said that the... →

By: Reuters     11th May 2021 A drop in electricity generation in Ivory Coast and Ghana has left households and businesses fuming as well as cutting power supplies to neighbouring West African countries Mali and Burkina Faso, officials said. A prolonged dry season has reduced water levels at hydropower dams in both countries... → 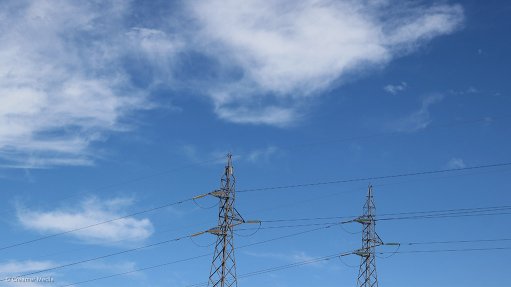 By: Simone Liedtke     6th May 2021 Production from the Zinia Phase 2 short-cycle project, which is connected to the existing Pazflor’s floating production, storage and offloading (FPSO) unit in Angola, has started. The project is operated by petroleum refiner Total, which is the joint operator of Block 17 in Angola, together with... → 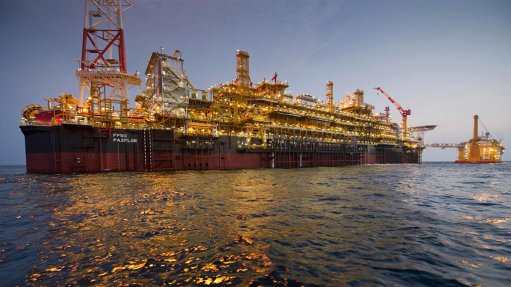 By: Bloomberg     6th May 2021 Eskom Holdings, South Africa’s State power utility, doesn’t want to buy electricity from the company that won most of a government emergency-power tender because it’s concerned about the cost and length of the contract, according to two people familiar with the situation. Meeting the terms of... →

By: Bloomberg     5th May 2021 Eskom Holdings said the South African state utility is unable to agree to certain union demands over wage increases and declined to make an offer on basic salary until labor groups respond. The loss-making electricity provider “cannot afford” proposals such as an improvement in pay inequality,... →

By: Schalk Burger     30th April 2021 Nonprofit association the Energy Intensive User Group (EIUG) on April 30 said its new member Namibian and South African zinc mining company Black Mountain Mining (BMM) will strengthen the association and diversify its portfolio through the addition of the zinc industry. The EIUG is committed to... →

Clean, affordable energy still not accessible to the poor

By: Donna Slater     20th April 2021 The transformative role of clean, safe and affordable energy in reducing poverty and inequality, and in improving the quality of life of poor South African households as envisaged in the 1998 Energy White Paper, has failed to materialise to any significant degree, says State institution and... →

By: Bloomberg     19th April 2021 Eskom Holdings said it was urgently seeking new providers of technical support after Oracle Corp’s South African unit withdrew its services over a payment dispute. The State power utility has been in a disagreement with Oracle, which initially claimed Eskom underpaid it by about R7.3-billion,... →

By: Schalk Burger     16th April 2021 City of Johannesburg utility City Power will embark on a three-week programme to patrol and clear electricity lines servitudes of encroaching objects, it said on April 15. An investigation conducted by City Power into the cause of frequent power outages affecting the north-eastern corridors,... →

Electricity grids to benefit from IoT 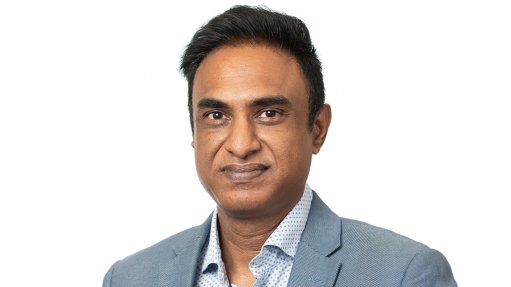 By: Nadine Ramdass     16th April 2021 The off-grid energy sector is continuing to grow, with shifts towards using standalone off-grid and renewable-energy-powered minigrid systems, as such systems can provide electricity in areas where current grid infrastructure cannot reach. However, despite the growth in the sector, there has been... → 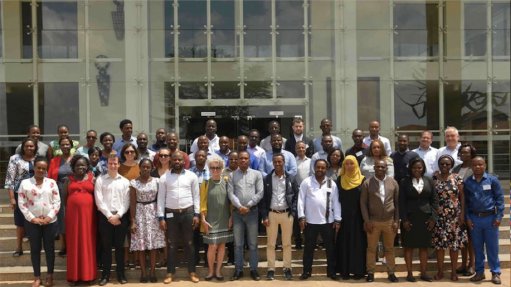 Solar to offer relief for the grid

By: Nadine Ramdass     16th April 2021 Southern Africa is familiar with low levels of electricity access and frequent electricity power cuts, owing to dilapidating infrastructure and its inadequacy to provide electricity in rural areas. However, using alternative and more affordable energy sources, such as solar, wind and... → 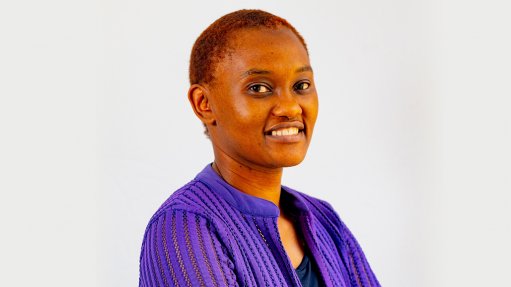 By: Reuters     15th April 2021 Above-inflation increases to South Africa's electricity and water prices pose a risk to the consumer inflation outlook and could trigger a rise in lending rates, the central bank said on Wednesday. "These risks, should they materialise, could drive headline above the 4.5% target midpoint and... →

By: Schalk Burger     13th April 2021 Poultry producer Astral Foods has obtained a High Court order against government and the National Treasury over the nondelivery of basic water and electricity supply services within the Lekwa (Standerton) municipality. In terms of the Order issued on April 12, government will be required to... →

By: Donna Slater     12th April 2021 A drone-operated system that can deploy bird flight diverters, or so-called “flappers”, has been designed and developed in a partnership between the Endangered Wildlife Trust’s (EWT’s) wildlife and energy programme and Eskom. The diverters serve as markers that will improve the visibility of... →

By: Bloomberg     6th April 2021 Eskom Holdings has taken steps to protect its operations from disruptions after a contractual dispute with Oracle Corp.’s South African unit put its technical support services at risk. The state power utility confirmed on Monday that it’s involved in the disagreement in which Oracle initially... →

By: Simone Liedtke     1st April 2021 City Power has appointed Mongezi Ntsokolo as its new CEO with effect from April 1. Ntsokolo has almost 30 years’ experience in the electricity industry, having served in different managerial roles at State power utility Eskom, including as group executive for generation, transmission,... →

By: Bloomberg     24th March 2021 South Africa’s National Treasury is considering whether it would be better to move a chunk of Eskom Holdings' R464-billion of debt into a special-purpose vehicle (SPV) or have the State take over responsibility for it directly, people familiar with the situation said. While banks have led... → 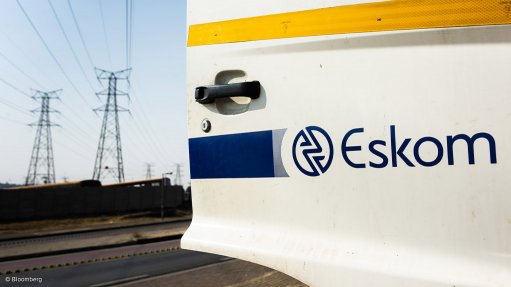 19th March 2021 Load shedding will be cancelled, for now, from noon on Friday as generation units return to service, Eskom has said in a statement.  Earlier in the week, generation capacity had been lost at Medupi, Arnot, Duvha and Kendal power stations. The shortfall was partly attributed to boiler tube leaks,... → 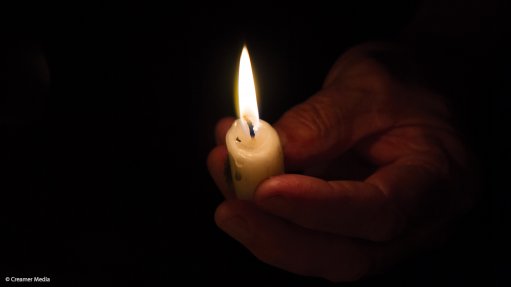 We will get State-owned entities back into shape eventually, insists DPE

By: News24Wire      17th March 2021 Deputy Minister of Public Enterprises Phumulo Masualle told Parliament on Tuesday afternoon that despite ongoing troubles at state-owned entities (SOEs) and delays in already announced plans to get them back in shape, the department still had a plan to improve the fortunes of beleaguered... →

By: Terence Creamer     15th March 2021 Eskom CEO Andre de Ruyter insisted on Monday that, despite a recent return to load-shedding, progress was being made on the utility’s so-called reliability maintenance programme to improve the performance of the coal fleet to the point where the risk of rotational power cuts would be materially... → 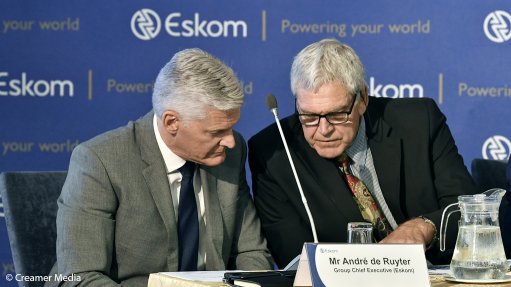 Opinion: Is load-shedding here to stay?

15th March 2021 In this opinion piece, South African National Energy Development Institute (SANEDI) GM Barry Bredenkamp writes about steps electricity users can take to reduce demand as load-shedding continues. Since Eskom cannot meet the country’s demand for electricity, load-shedding is likely to be with us... → 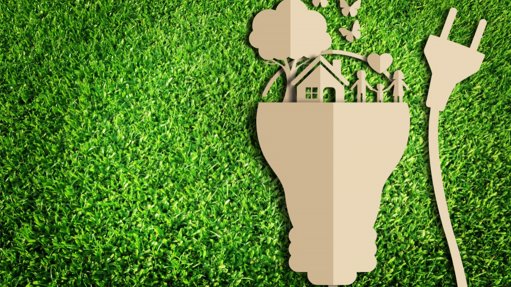 Eskom to extend load-shedding to Wednesday

By: News24Wire      15th March 2021 Eskom announced on Sunday that stage 2 load shedding will be extended to 05:00 on Wednesday following the loss of further generation capacity and to replenish emergency generation reserves. The power utility said it regrets having to take this step, but it is due to generation capacity still... →

12th March 2021 In this opinion piece, South African Photovoltaic Industry Association (SAPVIA) COO Niveshen Govender points out that proposed changes to the electricity tariffs charged by Eskom  shows that the utility is moving to a more proactive position that responds to the needs of consumers but also... → 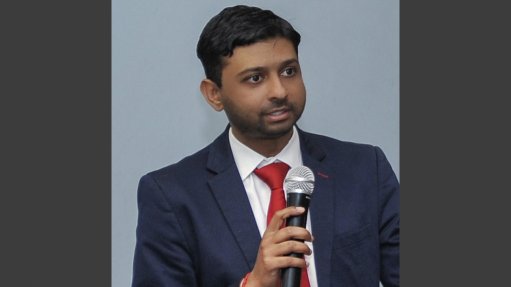 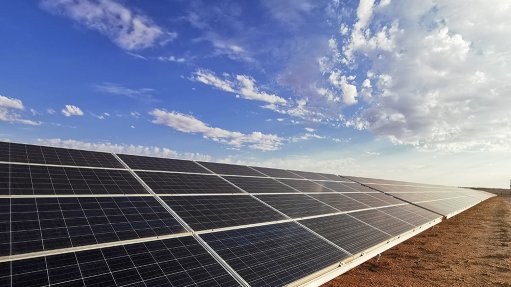 By: Creamer Media Reporter      10th March 2021 Power utility Eskom says it will implement Stage 2 load-shedding from 17:00 on Wednesday until 23:00 on Friday as the generation capacity is severely constrained. "There is a probability that load-shedding may be implemented at short notice should any further breakdowns occur before then," it... → 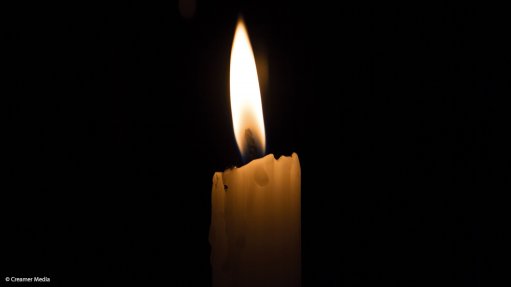 By: News24Wire      4th March 2021 The Eskom board has claimed that a number of allegations made in the public and media, including against its CEO Andre de Ruyter, are aiming to influence internal operations and good governance processes at the state power utility.   These allegations and what the board regards as accompanying... →

Africa’s recovery must include sustainable energy

By: Tasneem Bulbulia     2nd March 2021 Africa’s recovery from the impacts of the Covid-19 pandemic will take a long time, as each country has experienced different levels of disruption, and therefore, require different pathways. This was indicated during a World Energy Council session as part of the virtual Africa Energy Indaba on... →

By: Bloomberg     1st March 2021 Bondholders of South Africa’s state-owned electricity company are watching the latest round of rescue talks from a distance. Yields suggest they’re confident their money is safe, whether or not the discussions result in a sustainable solution for Eskom Holdings' $32-billion debt pile. Eskom’s... →

17th February 2021 Creamer Media's Chanel de Bruyn speaks to Engineering News Editor Terence Creamer about Eskom's plans for repowering and repurposing the Komati power station and others in its coal-fired fleet, as well as the power utility's focus on ensuring the transition to renewables is just. → 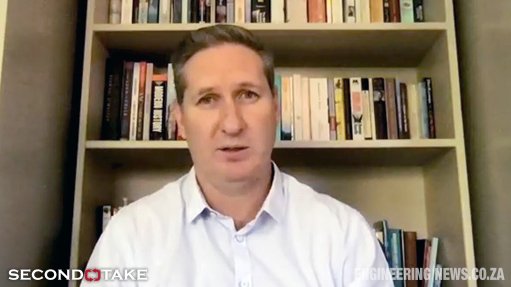 By: Terence Creamer     15th February 2021 Eskom CEO Andre de Ruyter has described the plan, announced by President Cyril Ramaphosa in his State of the Nation (SONA) address, to lift the licence-exemption threshold for distributed-generation plants as “one of the easier decisions” government could make in the near-term to alleviate stress... → 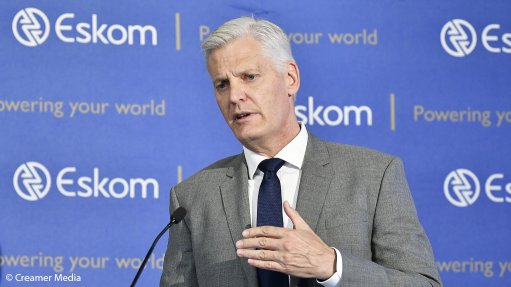 12th February 2021 Creamer Media's Chanel de Bruyn speaks to Engineering News Editor Terence Creamer about President Cyril Ramaphosa's announcement in his State of the Nation Address that the regulatory framework governing distributed-generation power projects will be amended and how this will help South Africa at... → 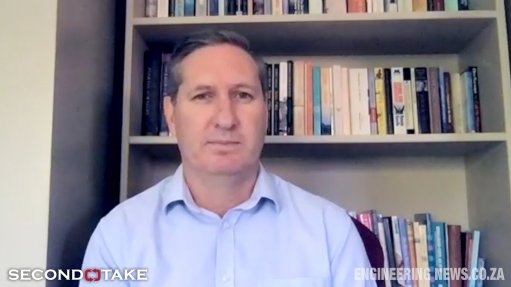