By: Jonathan Rodin     6th February 2015 South Africa is implementing stricter electricity- and water-saving regulations, which will automatically create opportunity for those operating in the green solutions industry, as companies and individuals will be forced to consider alternative heating and cooling solutions, says green building... → 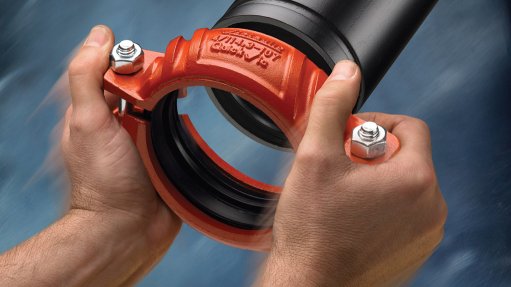 6th February 2015 Original-equipment manufacturer (OEM) Booyco Engineering has recently completed a contract to manufacture heating, ventilation and air conditioning (HVAC) equipment for two ship sets, which will be supplied by an international naval vessels OEM for a major North African end-user. The contract,... → 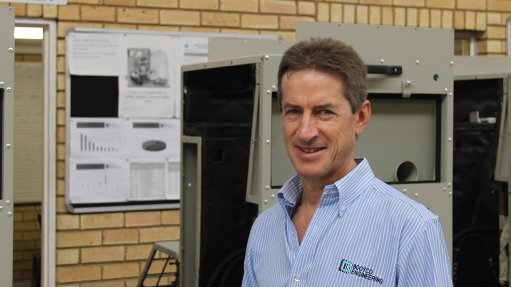 JEREMY POUGNET The company complies with global standards, as is evidenced by its Bureau Veritas accreditation

By: Jonathan Rodin     6th February 2015 With industrial processes placing an ever-increasing demand on the environment, it is imperative for equipment manufacturers to streamline product development processes with energy conservation, energy management and the preservation of natural resources to ensure a sustainable future, says... → 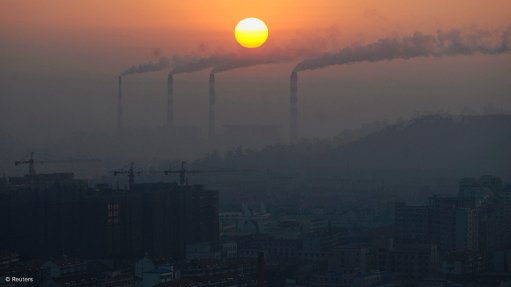 6th February 2015 Microbial growth in heating ventilation and air-conditioning (HVAC) systems with the subsequent contamination of indoor air is of increasing concern, as airborne bacteria and fungi have the potential to adversely impact human health by causing infections, allergic responses or toxic effects, says... →

By: David Oliveira     19th September 2014 Engineering and design company WSP Africa completed the preliminary design of an ammonia-based refrigeration system for Malaysian retailer Giant in June this year. WSP technical director Kobus de Villiers notes that the project has been delayed by three months, as the project team waited for the... → 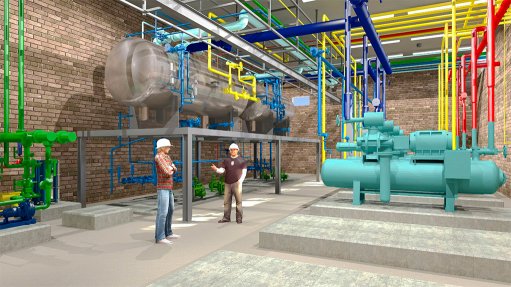 By: David Oliveira     19th September 2014 Technology group Johnson Controls launched its mini-chiller heating, ventilation and air-conditioning (HVAC) solution, which can be used in series as a modular solution, in May this year. Johnson Controls building efficiency GM Neil Cameron notes that the South African market is not ideal for... →

By: David Oliveira     19th September 2014 Johannesburg-based air-conditioning solutions provider Fourways Airconditioning is supplying heating, ventilation and air conditioning (HVAC) equipment to private hospital chain Netcare’s Polokwane hospital, in Limpopo. The project is expected to be completed by the end of the first quarter of 2015. → 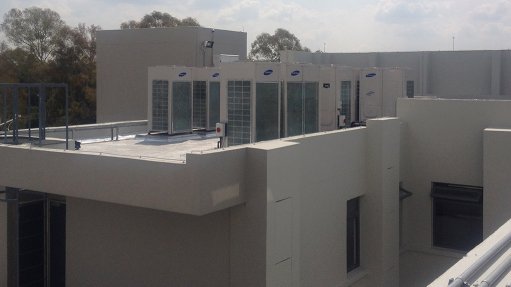 19th September 2014 The governate of the Vatican City State and heating, ventilating and air conditioning (HVAC) technology company Carrier announced the start of the installation of a landmark HVAC system for the Sistine Chapel, in the Vatican, in June, which is specially designed to address the challenges of... →

By: David Oliveira     19th September 2014 Global energy management specialists Schneider Electric announced at its Xperience Efficiency event in Johannesburg, which took place last month, that the new range of Zelio temperature controllers and accessories is now available to the South African market. These key components are used for... →

19th September 2014 Germany-based refrigeration company KTI-Plersch Kältetechnik announced last month that it received a large order to cool a South African gold mine with a surface ice system, which will be used to cool the two-kilometre-deep mine and will provide a total capacity of 8 MW. The company explains that... →

By: Pimani Baloyi     14th February 2014 Local warehouse chain Makro has been investing in cost-effective ways of heating and cooling its warehouses and refrigeration systems, says store development manager Alan Walker. He adds that Makro introduced an initiative to construct “new generation stores” that would be designed for energy... →

By: Pimani Baloyi     14th February 2014 In a bid to contribute to energy conservation in South Africa, car manufacturer Ford has installed the first counter-flow indirect evaporative cooling system in the country at its Action Ford dealership, in Krugersdorp, says dealership dealer principal Hartogh Streicher. The system is functioning... → 17th January 2014 Q-Power South Africa has introduced an advanced energy saving system for industrial boilers, the Q-Box system, to the local market. The company, which was appointed the sole local distributors for the system by Holland-based Q-Power in mid-2013, claims that the internationally proven system... → 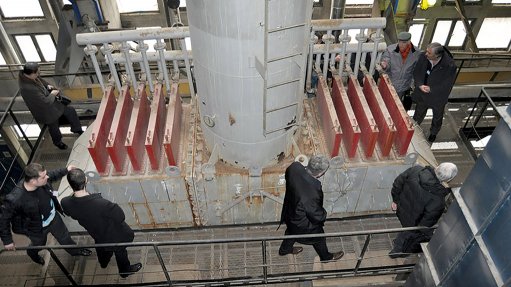 Photo by Q Power
Q-Boxes installed on either side of the exhaust stack in a fertilizer factory. This clearly shows how the Q-Boxes isolate the flue gas from the medium requiring heating (contained in the piping behind the stack), thereby preventing contamination in the event of a failure. Protection against contamination is further assured by the fact that the Q-Pipes in the Q-Box batteries are isolated from each other

By: Ilan Solomons     20th September 2013 The eThekwini municipality has registered its second clean development mechanism (CDM) project with the United Nations. The solar water heater and solar pump installation project was finalised as a CDM programme of activities (PoA) in July and is valid until June 2040. eThekwini municipality... → 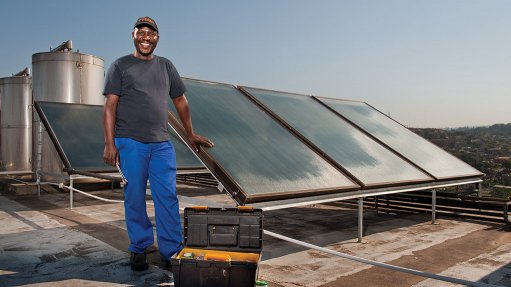 By: Ilan Solomons     20th September 2013 Energy efficient technology solutions provider i4 Power Technology  (i4PT) group plans to start manufacturing some its products locally, including its heating and cooling solutions, in the next 9 to 12 months, i4 Group CEO Ajay Jekison tells Engineering News. He says the company currently... → 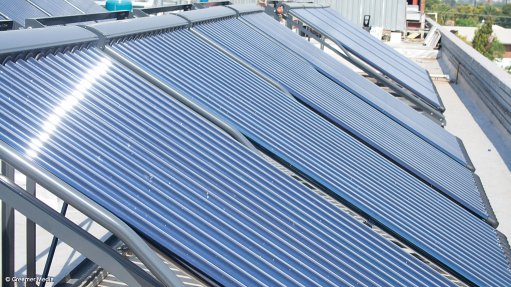 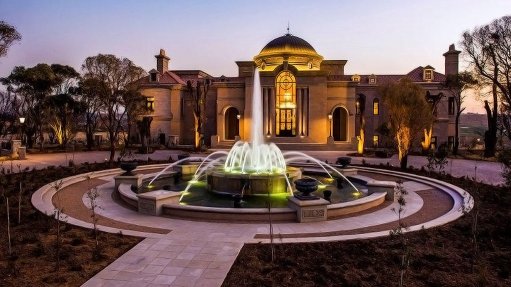 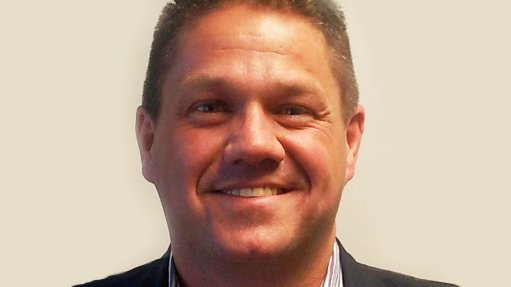 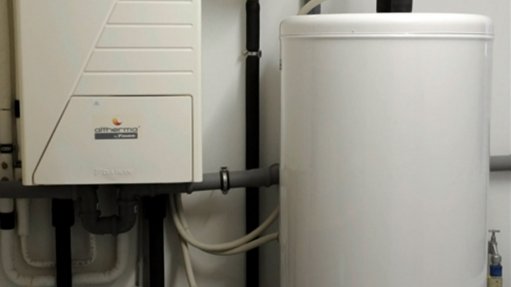 POPULAR CHOICE Heat pumps are more versatile as they can heat a room, produce hot water and switch modes to provide cooling in summer

By: Ilan Solomons     20th September 2013 Cellulose-fibre insulation can substantially reduce the energy required for heating and cooling buildings during the process of continuous heat generation or heat extraction, and it is being used in new and retrofit projects, states Cape Town-based green insulation developer Eco-Insulation GM... → 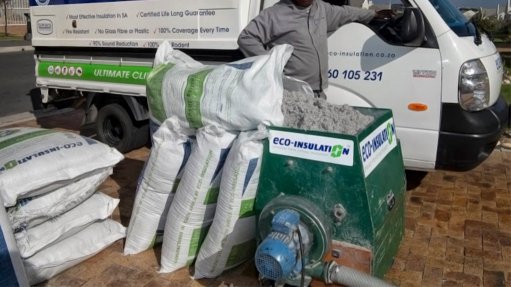 By: Sashnee Moodley     15th February 2013 The integration of Swedish technology into local dairy company Coega Dairy’s processing plant at the Coega Industrial Development Zone outside Port Elizabeth, has elevated the plant’s status to the “most environment-friendly and energy efficient operation in the southern hemisphere”, according to... →

By: Sashnee Moodley     15th February 2013 Water-cooling company Industrial Water Cooling (IWC) has entered into an agreement with Danish plate heat exchanger manufacturer Sondex to supply its products in sub-Saharan Africa, as part of IWC’s objective to expand its product and service offering.  →

Heat treatment for pest control to be introduced

By: Sashnee Moodley     15th February 2013 A new environment-friendly pest control method will be introduced onto the South African market this year and will eliminate the use of methyl bromide gas during extermination, which is harmful to the ozone layer.  →

By: Sashnee Moodley     15th February 2013 An air-to-water heat pump installation undertaken by industrial and commercial equipment specialist Advanced Industrial Technology, or Ai-Tec, is reducing the electricity consumption of Burgersdorp Hospital, in the Eastern Cape, by 70%. →

By: Sashnee Moodley     15th February 2013 In a bid to contribute to market transformation geared towards sustainability in the Western Cape tourism and construction industries, the environment-friendly Hotel Verde, in Cape Town, is installing geothermal heating and cooling designs worth R26.6-million.  →

By: Anine Kilian     21st September 2012 Boiler reconditioner and manufacturer Dryden Combustion launched its new Mk7 coal-fired boiler in South Africa this month. Two of these boilers will be installed in the Cape later this year. →

By: Anine Kilian     21st September 2012 Humidifier manufacturer Anstan Technologies hopes to secure a supply contract with South African poultry producer Earlybird Farm by the end of the year. Ensuring that the dry air created by air-conditioning systems is countered with humidifiers is crucial in ensuring the health of the chickens... →