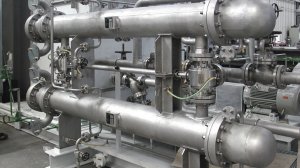 The company explains that corrosion in the aircraft industry can be disastrous if left undetected and untreated. Risks increase as aircraft age and are exposed to oxygen, moisture and other corrosive environments. Critical support equipment may fail if left unprotected.

Aircraft corrosion includes surface corrosion as indicated by roughening and etching, dissimilar metal corrosion that can cause pitting damage in unseen areas, inter-granular corrosion that may result in flaking metal and could be difficult to detect, stress corrosion which is common in landing gear, and fretting corrosion which can produce pitting and fine debris where two mating surfaces rub together.

Cortec’s VpCI products protect with a thin, monomolecular protective barrier that physically adsorbs on metal surfaces. The barrier has re-healing and self-replenishing characteristics and can be combined with many functional properties to protect against aggressive ions.

With VpCI protection, costs are cut through labour savings and the elimination of rust claims. There is no need to remove the VpCI protective layer, which reduces extra processing steps. VpCIs also offer improved health, safety and pollution control characteristics.

The VpCI technology expresses Cortec’s commitment to pro-environmental manufacturing and practices, reflected in the ISO 14001: 2008 Environmental Standard. In addition, many of Cortec’s VpCI products do not contain chromates or other heavy metals, nitrites or chlorinated hydrocarbons.

Additionally, Cortec’s Nano VpCI coatings protect aircraft and equipment surfaces against micro-corrosion by way of a tight bonding molecular layer. This eliminates gaps that are present between the relatively large sacrificial metal inhibitor particles on which traditional coatings rely.

Cortec Nano VpCI coatings are available in both primer and top clear coat applications for use on various aircraft surfaces.

Examples of where and how VpCI protection can be used include preservation of a naval aircraft engine, storage of a backup generator for emergency flight operations, cleaning of coast-guard aircraft, protection of electrical cabinets at the Atlas 5 launch pad at the north end of Cape Canaveral, in Florida, the US, and deep storage of a retired National Aeronautics and Space Administration space shuttle.

“The are many corrosion challenges in aerospace, but through VpCI technology Cortec provides cost-effective solutions to rise above significant corrosion issues limiting aerospace prospects,” the company concludes.