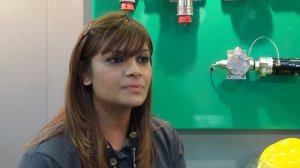 Safety products manufacturer MSA Africa launched the AirXpress 2 Fire – a new economical self-contained breathing apparatus (SCBA) – in the South African market last month, officially unveiling it to the public at the 2016 Electra Mining Africa Expo that took place from September 12 to 16, at the Johannesburg Expo Centre.

The AirXpress 2 Fire is suitable for use in firefighting, rescue operations, escape scenarios, confined-space entry, and search and rescue missions.

MSA Africa product marketing manager Suraksha Mohun explains that the product was previously launched to the rest of the African market in May, and then later in South Africa as it underwent homologation in respect of local respiratory compulsory standards to certify the product for use in South Africa. The new AirXpress 2 Fire also meets EN 137 Type II requirements for the fire-service market.

“It is not only reliable but also boasts an easy-to-maintain construction, which provides low cost of ownership,” she says.

Its customisable configurations allow for use in different first-responder applications. With a modern design, the AirXpress 2 features an ergonomic back plate, designed for unrestricted movement, while the chest strap prevents any slipping of the shoulder harness.

The carrier on the AirXpress 2 is made of glass-fibre reinforced polyamide to withstand extreme heat and flames, with a unique optional manual bypass function that increases the airflow in extreme environments.

The new AX demand valve comes standard and is fixed on the backplate, including an adjustable flow rate, based on user demand. This results in comfortable breathing and efficiency in air consumption.

Additionally, zippers on the shoulder harness allow for easy switching of the pressure gauge and demand valve from one side to another.

The company points out that no leak test is required once the hoses are switched. Further, the pressure gauge with a rubber cap offers increased protection against shock and impact. For easy reading, it swivels in every position. The luminescent double-scale bar and mega-Pascal scale ensure that no information is misread.

Optional features, such as a second connection for rescue purposes and a retrofittable radio-frequency identification transponder for easy inventory management, complete the SCBA system.

Moreover, one of MSA’s most unique and popular products, released last year, is the MSA G1 SCBA that now has an integrated thermal imaging camera that enables firefighters to see in dark and smoke-filled environments. This aids in the speed and effectiveness of an operation to working the fire, overhaul and rescue. The camera is integrated into the unit’s control module, eliminating the need to carry additional equipment and the concern of an additional snag hazard.

Mohun tells Engineering News that MSA is the first company globally that has a thermal imaging camera built into their SCBA units. It has greater visibility, improved heat performance and increased mobility.