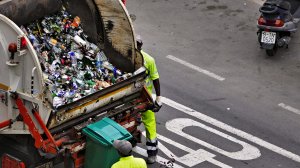 The South African National Energy Development Institute (SANEDI), ahead of World Environment Day on June 5, announced the finalisation of a concept design for an efficient and sustainable waste-to-energy technology.

SANEDI had commissioned the South African Nuclear Energy Corporation (Necsa) to design and build a more environment-friendly waste gasification and waste-to-energy system, and the result of this long-term project has been a success, the institute says.

The PlasGas and PlasWen systems are market-ready for adoption across the public and private sector, it adds.

The waste treatment system is a small-scale, mobile container unit that uses solid waste like wood chips and other combustible municipal waste like plastic as feed material to produce syngas that can be converted into energy products, such as electricity, fuel, hydrogen, heat or steam.

“If electricity is generated, this can be used as auxiliary power to sustain the plant. In addition, the system will have spare capacity of electricity, to use elsewhere, depending on the scale of operation,” says SANEDI project manager Dr Neville Smith, who led the design concept alongside Necsa chief scientist Dr Jaco van der Walt.

Plasma gasifiers make use of a plasma arc torch as the primary heat source. The plasma torch forms a tail-flame which is directed into the gasification reactor and ranges in temperature from 2 000 ˚C to 7 000 ˚C. This releases a high amount of energy in a small space.

Conventional thermal processes use natural gas, liquefied petroleum gas, diesel or oil burners as a heat source, albeit at lower temperatures. The higher plasma temperature results in a more complete gasification. The higher gasification temperature also minimises air pollutants to levels well below those of the other methods.

Unlike conventional gas-to-waste technologies, this closed and subsequently safer system ensures that no further waste is created by producing materials that can be sold off as by-products to other industries, Smith and Van der Walt note.

“The design is also aligned to South Africa’s climate conditions. This is a proof of concept that can be manufactured to fit a container and scaled with the right finance and investment by the public and private sectors,” says Smith.

SANEDI interim CEO Lethabo Manamela has welcomed the finalisation of the PlasGas and PlasWen proof of concept, which validates the feasibility to convert waste to energy more efficiently and within the context of the country’s climatic and other conditions.

Meanwhile, South Africa is freeing up the energy market by promoting competition through regulatory changes that allow independent private producers to generate up to 100 MW of electricity without a licence from the National Energy Regulator of South Africa, SANEDI adds.

President Cyril Ramaphosa has also encouraged municipalities in good financial standing to take advantage of the adjusted regulations that will help them reduce their reliance on the constrained national power grid by embracing newer more efficient and sustainable ways of producing energy and reusing waste, the institute adds.

In so doing, local governments will benefit from independent energy security while reaping the benefits of new investments and job creation as cities transition from greenhouse-gas-intensive to cleaner, greener forms of energy.