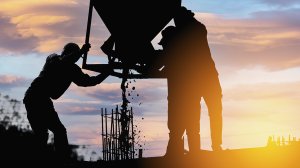 Cement & Concrete South Africa CEO Bryan Perrie discusses the current state if the industry, as well as the formation of the CCSA.

Although the local cement and concrete sector is experiencing its lowest production and supply levels in years, industry body Cement & Concrete South Africa (CCSA) CEO Bryan Perrie says earmarked infrastructure projects and import tariffs, if implemented, will be instrumental in boosting the demand for cement and concrete.

The South African National Roads Agency Limited (Sanral) has indicated that it will implement about 415 projects across the spectrum of maintenance, operations and construction, with a reported budget of R64-billion, all to start within the next year.

Other initiatives that will hopefully improve the sector include the International Trade Administration Commission of South Africa’s (ITAC’s) implementation of import tariffs on cement imports, Perrie points out.

The tariffs will protect local producers from the mass importation of cheaper cements from countries such as China, Pakistan and Vietnam.

The initial anti-dumping tariff was executed by the ITAC on imported cement from Pakistan for a five-year period that started in 2015. ITAC has accepted an application to review the tariffs which means the current tariffs will remain until the investigation is concluded.

Perrie suggests that additional growth will hopefully be achieved through the Department of Trade, Industry and Competition designating cement, which will require every government-funded project to buy locally manufactured cement using locally sourced raw materials.

Perrie says the CCSA has been formed through the consolidation of like-minded industry bodies the Concrete Society of Southern Africa, the Association of Cementitious Materials Producers and The Concrete Institute (TCI).

Launched in March this year, the CCSA hopes to offer a unified services platform for all involved in the manufacturing, supply and use of cement and concrete in South Africa.

“CCSA will open channels among all the relevant parties, including government, to maximise the growth in the sector in the coming years,” he suggests.

Perrie explains that the TCI already had numerous courses in place, which the CCSA will continue to offer and build on through the School of Concrete Technology.

He adds that the association will work with the South African Bureau of Standards to garner better quality and controls in the sector.

He concludes that CCSA will continue to engage with the cement and concrete sector to recruit old members from the three associations that formed the CCSA, as well as new members in the hopes of forming a meaningful and efficient industry body.