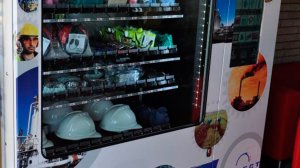 Personal protective equipment (PPE) management solutions provider Select PPE has introduced an improved version of its PPE vending machine that provides all the benefits of an on-site store.

Select PPE sales director Dries van Tonder tells Engineering News that the latest model, which was launched in August after the initial product was introduced in 2012, can stock larger PPE products like hardhats and boots

He adds that the vending machine does not use the old spiral technology and its software has also been upgraded, allowing for stock controls similar to those employed in the company’s on-site stores. The new machine, therefore, reduces costs by eliminating the need for store personnel and in-store space.

Van Tonder says Select PPE has contracted a local company to assemble the various components of the vending machines, adding that the chassis is locally built, while the programmable logic controller is imported from Europe.

The new model has been in development for the past five years. “[Select PPE] could never get the old technology to do exactly what was needed, but now, we finally have it locked down,” he says.

As the product is relatively new, only a single demonstration model is in use but Van Tonder believes that demand will increase significantly in the near future, especially since Select PPE holds the sole distribution rights over PPE vending machines in Africa.

Frost & Sullivan Award
Select PPE was one of the companies honoured by US consulting firm Frost & Sullivan at the 2015 Growth, Innovation & Leadership Awards, which took place in August in Cape Town.

Having been nominated by several of its clients, Select PPE won the Visionary Innovation Leadership Award for its value-adding software and its online store, which has made PPE accessories more accessible to smaller operations that are unable to use on-site PPE facilities, owing to financial constraints.

Additionally, all Select PPE customers can access the enhanced online service platform, which enables them to monitor equipment in real time, assess the type and quality of PPE required for certain tasks, and replenish old stock

In its motivation for honouring Select PPE with the award, Frost & Sullivan noted that the company had maintained a yearly growth rate of at least 15%, despite the reduced growth rate of the mining and industrial sectors, which accounted for about 70% of the PPE industry.

Frost & Sullivan also noted that Select PPE pioneered the industry’s move towards manufacturing products specifically designed for women. “We are engaging with the mines and one of the local gumboot manufacturers to measure the feet of women working on mines to produce a more suited and easier-fitting ladies gumboot,” says Van Tonder.

He tells Engineering News that, while the award has been good for company morale, it has, more importantly, spread awareness of the company’s achievements.  “It also assures us that our innovations are actually meeting the demands of . . . our customers.”

Select PPE also intends to outsource its value-adding software to distributors in other Southern Africa countries and to use the royalties for further expansion. Van Tonder notes, however, that there are legalities and technical issues to sort out first.

Products and Services
Select PPE implemented a new security and control feature earlier this year, whereby customers sign on a digital signature tablet when receiving PPE from its stores.

Van Tonder says the company has the most up-to-date issuing system, which controls the PPE issued for every person, department and timeframe, ensuring that sufficient PPE are provided and not wasted.

It also provides proof of the PPE issued to each person, safeguarding mines and mine management from litigation.

Samancor Contract and Expansion
Select PPE started a three-year contract in February last year to take over the control and distribution of PPE at chrome miner Samancor’s Western chrome mine, in Rustenburg.

“So far, we have opened stores at three of [Samancor’s] local mines and hope to expand further over the next six months,” Van Tonder says.

He adds that the project was put to tender, with about eight PPE solution providers that applied. “Select PPE got the contract not only because of our ability to provide the best product at the best price but also because of the services we have provided for other major customers, including platinum miners Impala Platinum, Anglo Platinum, Aquarius Platinum and Bafokeng Rasimone Platinum Mine; gold mining majors Anglo Gold Ashanti, Harmony Gold and Sibanye; diversified miner Xstrata; and steel major ArcelorMittal”.

The Frost & Sullivan write up on Select PPE noted that Samancor saved R 1-million within the first year of Select PPE’s operation.

The company has now opened retail stores in Rustenburg, in the North West; Kathu and Mosselbay, in the Northern Cape; and Randfontein, in Gauteng.

Industry Overview
Van Tonder believes that PPE is a demanding, but important industry. “Precious metal prices and labour challenges have put a lot of pressure on mines, and the mining industry’s struggles have, in turn, put pressure on surrounding industries. The challenge is, therefore, to provide sustainable solutions that help our customers through these challenging times.”

He maintains that the way forward is not only to supply the cheapest product but also to ensure that companies supply the best product for specific applications, which would ultimately save the customer money.