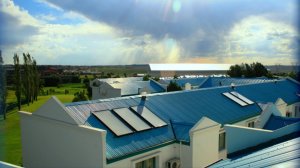 SolarPlus officially introduced this solution to the public and industry at the 2014 Homemakers Expo, in Pretoria, in September, he says, noting that the company was “founded . . . to provide the South African residential market with long-term cost-efficient energy solutions by leveraging solar energy”.

The company spent a year developing its controller to enable remote management and optimisation and, in August, installed the first SolarPlus units in the Pretoria and Johannesburg areas. Demand has been strong and, within days, the order book grew to another 100 systems, Miller says.

“The SolarPlus solution leverages off proven solar energy collector technology, but is unique as SolarPlus brings its own intellectual property to manage the systems and capital to fund the installations, while the consumers pay a fixed monthly subscription fee,” Miller explains.

This solar energy-integrated controller, called Seinc, interacts with the SWH system on a smart basis by providing the geyser electrical timing, geyser use and backup functions, monitoring the system’s energy use remotely and recording the energy savings data, he explains. The controller is being patented.

Company research, done last year, indicates that key barriers to entry are neither the technology nor the product, but the consumers as they can either not afford it or are uncertain regarding the benefits, while long-term return periods limit the conversion impetus.

While the company considers itself to be in the prototype phase of the solution, with a version that functions sufficiently, it will continue to refine the system and add more feature sets as time progresses, Miller says.

“South Africa is an energy-stressed nation, as it is unable to meet the current required power demand. “This is evident in Eskom’s maximum production capacity, with peaks continuing beyond safe limits. In light of this, to significantly impact our energy future, we need the mass adoption of residential solar,” he emphasises.

SolarPlus has identified five key areas for residential solar implementation – Johannesburg, Ekurhuleni and Pretoria, in Gauteng; Cape Town, in the Western Cape; and eThekwini, in KwaZulu-Natal. These are the primary nodes, with “the right market size” and within which the company has identified 2.7-million eligible homes.

SolarPlus’s goal is to implement its systems at 200 000 homes within a ten-year period in the identified areas, Miller says.

One SolarPlus system can save about 3.6 MW of electricity each year, which would equate to about 300 kW/m, Jones points out.

“Moreover, these 200 000 connected homes will remove about 720-million kilowatt hours from the national grid in those ten years,” Jones predicts, further highlighting that, during this period, about R8-billion in energy generation costs will be saved, with about 740-million tonnes of carbon dioxide being eliminated.

He adds that this solution has been favourably received by the industry and Eskom, as a key consideration of the State-owned power utility is electricity-use reduction, with a stated objective to reduce residential consumption by having 650 000 homes converted.

Since inception, Eskom has converted about 87 000 homes to SWH as part of the incentive programme.

“Moreover, if one considers the available market, SolarPlus could move from an initial stage of solar water heating to a second stage, which comprises solar energy production, using the same components of the SolarPlus solution,” Miller suggests.

Looking Forward While SolarPlus aims to deploy about 1 400 systems this year, Miller notes that the company is achieving exponentials of this target, and intends to install – at the very least – 15 000 systems within the first five years.

While SolarPlus funds its own growth and asset investment through a fixed yield investment programme, the company recently issued a new round of preference shares, which enables clean energy funds and retail investors to invest in the asset-backed shares and receive a monthly dividend. “The fund has been well received and the first round was oversubscribed,” Jones says.

adds that if the company achieves these goals for the ten-year period, it will have tripled the size of the local solar energy industry. In addition to highlighting that the opportunities for solar energy companies should be unlimited, given that the South African solar energy industry is in “the sweet spot” in terms of solar availability in the world, he emphasises that these residential initiatives should be the tipping points that create further opportunities for the industry.

However, a key constraint to converting residential homes into “distributed power generators” is that not all the municipalities have adopted power production incentives or related agreements, Jones points out.