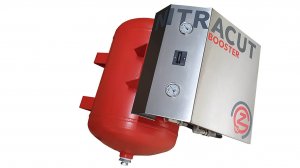 The NitraCut generators provide on-site, on-demand, high-purity nitrogen gas for the fabrication sector, which is essential for plasma and fibre laser-cutting and fabrication. Traditionally, these sectors have sourced nitrogen in cylinders or bulk liquid, which can be costly and cumbersome to manage.

“A busy fabricator can amortise the cost of a NitraCut generator within a year by generating its own nitrogen,” says NitraLife MD Tom Sowry, adding that, once the NitraCut has paid for itself, the fabricator essentially has a free supply of nitrogen, which leads to significant cost savings in the medium to long-term.

The original NitraCut produced nitrogen only up to 14 bar pressure, which limited the value it could provide for some customers, who sometimes needed more pressure to cut thicker steel. The booster now enables pressure of up to 19 bar, which Sowry believes fills a gap in the market and improves the NitraCut’s capability and relevance in the fabrication sector.

“We are optimistic going forward that the nitrogen booster will further improve our ability to service an even wider customer base,” he says.

The booster, therefore, allows for the laser or plasma cutting of mild steel and stainless steel with a thickness of 6 mm to 12 mm, and light steels, such as aluminium, with thicknesses of between 20 mm and 30 mm, laser dependent.

The unique feature of the NitraCut nitrogen generator is that it can run 24/7 and can deliver variable pressures, depending on user requirements, thereby allowing for continuous production because it can deliver nitrogen directly to the laser without having to store it first. The booster provides the same functionality and works on a variable speed pneumatic drive, which synergistically speeds up and slows down as required, while keeping the pressure constant.

Sowry says conventional boosters do not offer the variable delivery of nitrogen that NitraLife’s booster can provide.

The NitraCut was first developed in 2016 and has since been supplied to fabricators throughout South Africa and into sub-Saharan Africa.

The NitraCut booster is manufactured locally from imported parts.