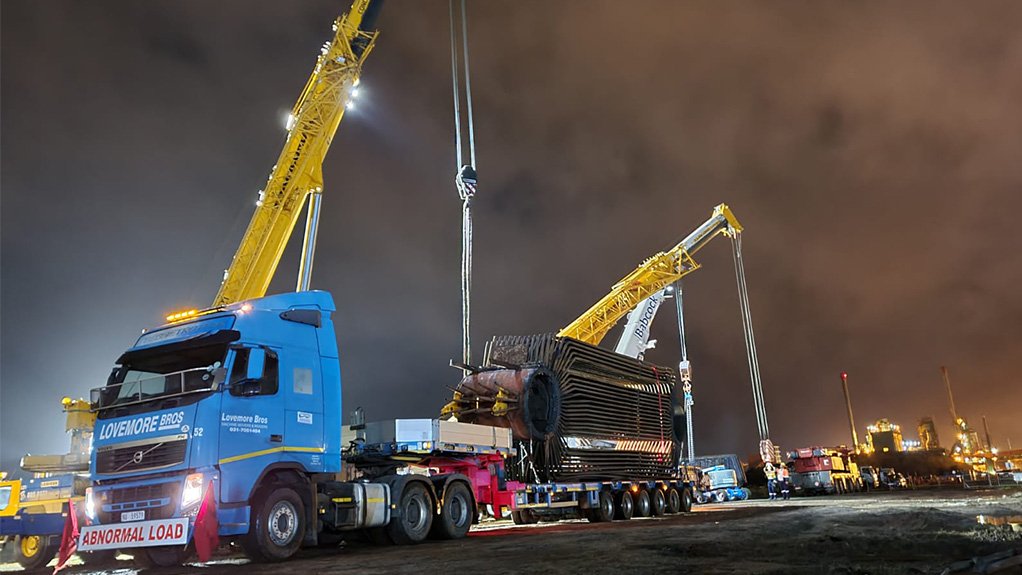 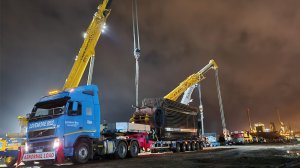 Heavy lifting and rigging specialist Lovemore Bros has successfully concluded a longstanding contract with a global pulp and paper company based in South Africa.

The project entailed the installation of a complete boiler, digester and evaporation plant at a pulp and paper mill in KwaZulu-Natal.

She adds that the project had a broad scope, from maintenance rigging and abnormal transport, using a self-propelled modular trailer (SPMT) for the transport and installation of boiler, digester and evaporation plant modules of up to 240 t.

“The SPMT made light work of the narrow spaces and heavy loads,” she enthuses.

Further, the company’s experienced engineers motivated built-to-order concepts to assist in transporting and lifting into position structural modules, large tanks, economisers and chillers, besides others.

The team assigned to the project was positioned on site for the duration of the project, which consequently allowed for additional tasks to be awarded to Lovemore Bros.

Nel says the fleet that was dispatched to the project included five crane trucks, each with a lifting capacity of up to 22 t; telehandlers; forklifts; and a number of extendable rear-steer low bed trailers.

“The on-site fleet was complemented by a 45 t stack reacher and a number of mobile cranes.

A professional project management team took on the task of managing the vast array of machinery on site, with up to 40 personnel of differing skills and disciplines.

Dealing with the interactions of multiple contactors and an ever-changing site landscape was also a constant battle amid the company’s having to transport massive structures and equipment.

It is notable that this particular project was not the only project that the company has undertaken in the paper milling sector recently.

“The company was integral in the lifting requirements at the boiler recovery and rebuild at another multinational packaging and paper group’s mill in Richards Bay, in KwaZulu-Natal, Lovemore Bros Heavy Rigging manager Shane Hawyes tells Engineering News.

“Twelve rigging teams and a large selection of lifting machinery were available on site for the three-month project, for which we completed our scope in December last year,” he adds.

The machinery on site included a 750 t crawler crane and supporting crane trucks, making Lovemore Bros well equipped to handle all the lifting requirements of the project, says Hawyes.

According to the client, the intense project was the biggest shutdown in that client’s South African history.

Hawyes says one of the greatest challenges of the project was effecting a clear line of communication among all the contractors, staff and machines on site.

Further, health and safety issues that arise because of lifting and moving large objects meant that the company had to have strict lift procedures and safety watches in place.

“We mitigated these by collaborating with all relevant parties, and managing an effective lifting plan,” he concludes.