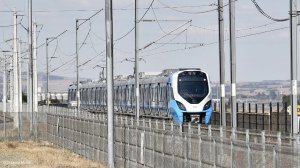 Gibela, whose shareholders are Alstom, Ubumbano Rail and New Rail Africa, in 2013 signed a R53-billion contract to supply PRASA with 600 six-car trains for its Metrorail service. The trains are manufactured at Gibela’s Dunnotar facility, in Nigel, Ekurhuleni.

Transport Minister Fikile Mbalula said the manufacturing of these trains was a “major milestone.”

“We had a vision [about] what we are going to do here and we did deliver what we’re supposed to deliver in terms of Gibela,” he added.

Gauteng Premier David Makhura noted that the Gibela factory had helped to create jobs and that it contributed to the modernisation of rail which, in turn, supported industries such as the steel industry.

He stressed the importance of localisation, adding that manufacturing locally would also benefit the rest of the African continent.

She added that the consortium also supports the revitalisation of the South African rail industry and driving economic growth, with the company employing about 1 100 people, with 70% being young people and 46% being women.

Charnley pointed out that Gibela had been given three sets of obligations from PRASA, with the first being the upskilling of local suppliers.

Secondly, PRASA had stressed the need to develop skills of local workers, with Gibela having developed 9 100 skilled employees.

Meanwhile, amid the excitement over the new trains being introduced onto PRASA’s network, Makhura and PRASA chairperson Leonard Ramatlakane highlighted the impact of rampant theft and vandalism of PRASA’s trains and infrastructure over many years.

They stressed that it was important for all role-players to work together to ensure the theft and vandalism does not continue.

“Together we will achieve the goal of providing passenger rail to millions of people daily to alleviate the hardship of economic conditions to the country and especially the working class.

"We call on our communities and the public at large to protect these assets. This asset belongs to you, the South African people. Without these trains, we cannot provide a service [that is] reliable [and] safe,” said Ramatlakane, adding that the country could not allow the level of destruction and vandalism that had prevailed up to now.