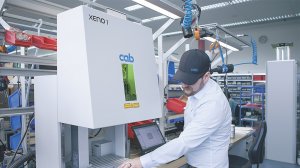 “The Xeno 1 was bought to mark the connectors that Hiconnex Industrial will produce for a new fleet of 600 modern commuter trains being built for South Africa’s metro railway network,” he notes.

The Xeno 1 is a desktop system that meets all the requirements for a cyber-physical system, which involves the interlinking of mechanical or electronic components with advanced information communications technology and communicating, for example, through the Internet, Buys explains.

The desktop system is delivered ready to operate with the marking software cabLase. Connection is established either through Ethernet on a local personal computer or the network.

Buys highlights that the Xeno 1 can accommodate remote control and monitoring in networks that include machine-to-machine or human-machine interaction.

Hiconnex Industrial has been authorised by data, signals and power connectivity solutions supplier Harting Technology Group to produce the connectors. Harting South Africa – a subsidiary of Harting Technology Group, which signed off the installation of the Xeno 1 in July – has secured a supply agreement with train manufacturer Gibela, which, in turn, has a contract to supply the trains to the Passenger Rail Agency of South Africa.

The system is easy to use and it complies with high industrial standards. The laser source and control unit are integrated in one common laser safety housing unit, according to laser protection Class 1. A Class 1 laser is safe under all conditions of normal use.