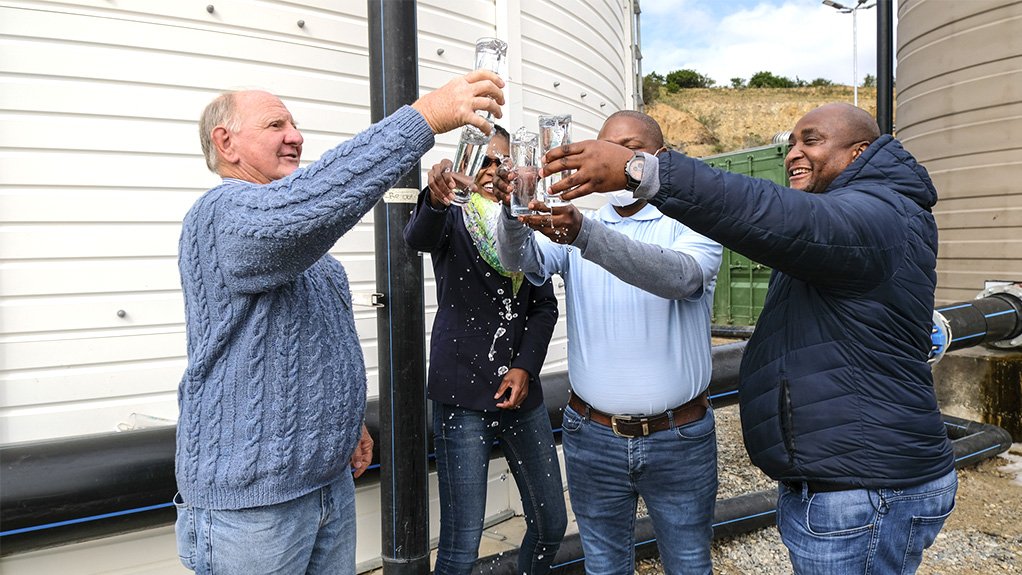 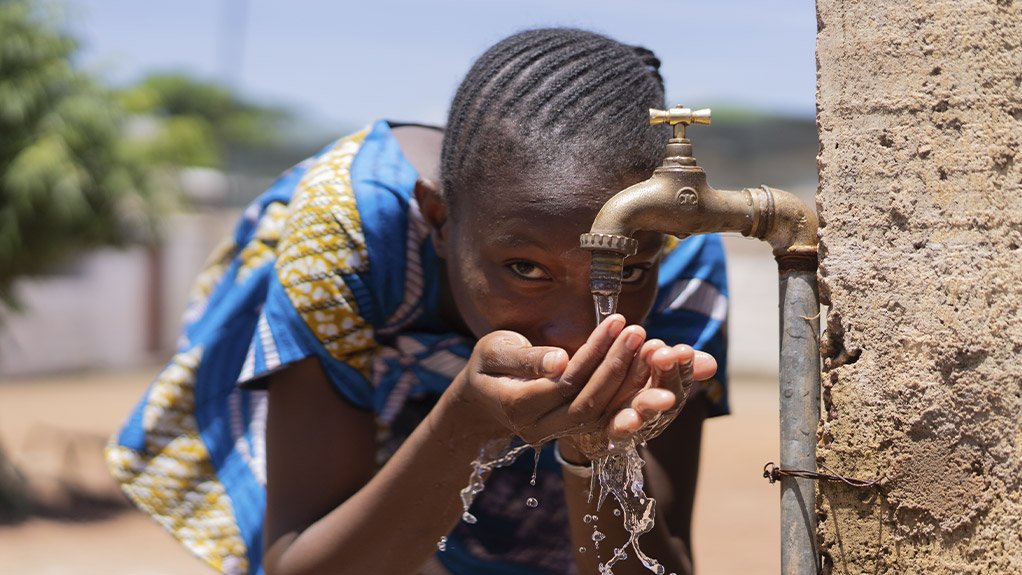 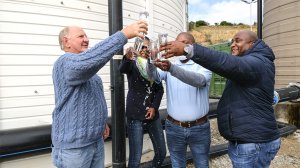 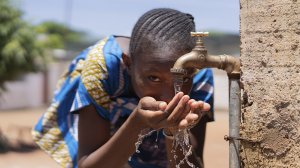 CHEERS Stakeholders celebrate 100-million litres of potable quality water being pumped into the Ndlambe municipal reticulation system
DRINKABLE The quality of the water from the desalination plant meets the requirements of SANS 241:2015, which specifies the quality of acceptable drinking water

The Ndlambe seawater reverse osmosis (RO) plant in Port Alfred, in the Eastern Cape, reached the milestone of having pumped 100-million litres of potable quality water into the municipal reticulation system last month, providing relief for the drought-stricken region.

“The desalination plant was commissioned on June 23 and started pumping immediately. The plant was ramped up slowly over a few weeks. We have overcome many hurdles in this project,” says Quality Filtration Systems (QFS) director Musawenkosi Ndlovu.

“Although the infrastructure has been completed, the wastewater reuse plant has not been commissioned yet. We are monitoring sewage inflow and putting biology in place. It takes 60 days for the biology to be good enough to start commissioning the plant,” Ndlovu tells Engineering News.

A large portion of the project was funded through the Regional Bulk Infrastructure Grant from the Department of Water and Sanitation (DWS).

Public tenders were called for during September last year, closing on October 26. Four tenders were received by the closing date, which were evaluated by the bid evaluation committee and, thereafter, the bid adjudication committees of the Ndlambe municipality. These processes were completed in November.

The tender was awarded to QFS at the end of November last year, based on the points scored and the price submitted for the tender, said Ndlambe municipal manager Rolly Dumezweni in a statement issued in February 2021.

“QFS manufactures 70% of all equipment required for any project locally, and presented a competitive and sustainable solution to the Ndlambe municipality. We also focused on skills transfer, which is critical in ensuring that the infrastructure is maintained,” Ndlovu explains.

Dumezweni noted in the statement that the contract also specified that a portion of the work had to be awarded to small, medium-sized and microenterprises (SMMEs).

He said the procurement of these companies was performed through a public process managed by QFS. Three SMME packages were awarded. The handover of the respective sites to two of the SMMEs was done in January.

QFS hosted a ‘lessons learnt’ session with the SMMEs, the SMME Business Forum and consulting engineers to discuss the project and various methods used to overcome challenges.

Through such sessions, Ndlovu says QFS has developed a clearer understanding of how SMMEs can be used effectively to assist in implementing projects of this nature.

Ndlovu said in a statement issued last month that QFS was grateful for the support it received from the DWS, project management company Newground Project, the Department of Cooperative Governance and Traditional Affairs, as well as the Ndlambe municipality, throughout the project’s implementation.

“When contractors are well supported, projects have a greater chance of success and this is a perfect example,” Ndlovu adds.

She claims that the quality of the water from the desalination plant is “far beyond” the requirements of SANS 241:2015, which specifies the quality of acceptable drinking water, defined in terms of microbiological, physical, aesthetic and chemical determinants.

“We are proud to be the first municipality in the country to combine a desalination and wastewater plant at one site,” said Ndlambe municipality infrastructure director Noluthando Vithi-Masiza in a statement issued last month.

The multimillion-rand plant, which aims to deal with the crippling water crisis brought on by protracted periods of drought, is fitted with state-of-the-art engineering technology to treat and process seawater so that it is suitable for human consumption. The plant is fully automated to ensure there is no human error and the water quality produced is not compromised.

“A project of this nature is technically complicated and advanced. The performance of the plant has improved substantially and we congratulate the project team for making this possible,” said Newground Projects managing member Louis Fourie in a statement issued last month.

QFS will continue to operate and maintain the plant for the next three years, during which time it will operate a skills-transfer programme for local residents. During the construction phase, QFS provided skills transfer for local SMMEs through mentorship.

The company has employed 12 local people who are also the first batch of trainees of the QFS Training Academy. They will receive qualifications accredited by the sector education and training authority, which Ndlovu believes will make them more employable in future.

“Working with local communities in implementing these projects builds a sense of pride, as each party plays an active role in solving the water challenge faced by the nation,” Ndlovu said.

The high demand for water treatment services in the Eastern Cape has led QFS to open a branch in Port Alfred.