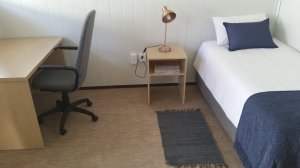 Prefabricated buildings manufacturer Kwikspace Modular Buildings helped to facilitate a smooth turnaround process during a three-month shutdown at one of Southern Africa’s largest crude oil refineries this year, through the supply of modular housing for critical staff.

Kwikspace notes that, while South Africa is heavily dependent on petroleum products to keep the economy running, major refineries need to periodically suspend or circumvent crude oil production to conduct routine maintenance, renovations and repairs. In order to facilitate a successful turnaround for Sapref – a joint venture between oil and gas companies Shell SA Refining and BP Southern Africa – at its Durban-based facility, nearly 100 workers from various international locations needed to be trained and housed.

Facilities were required not only to house the extra employees working on the project, but many of the contract workers had to undergo an onboarding process that further required world-class facilities for the testing and training of the mechanical disciplines during the turnaround.

“With a capacity to process up to 190 000 bbl/d of crude oil amounting to 8.5-million tons a year, we knew that the effects of the turnaround could have a significant impact on the productivity of the refinery. This is why Kwikspace provided a quick and cost-effective solution that would enable Sapref to complete the turnaround process without any delay,” says Kwikspace rentals manager Bruce Gelling.

Kwikspace was contracted to provide 16 two-bedroom sleeper units to accommodate 64 contract workers and a large canteen at the nearby Bluff Eco Park. Gelling highlights that Kwikspace’s flexible options allowed the client to reduce the capital expenditure that would have otherwise been required, fulfilling the client’s short-term needs for the project. As part of their value-added services, Kwikspace also provided kitchen equipment, furniture and bedding.

“These prefabricated buildings are specifically designed for rapid assembly and are manufactured in modules which allow for expansion. In addition to the accommodation units, we were able to deliver a large canteen assembled out of six 2.4 m × 6 m modular units within a short timeframe.”

Kwikspace’s units are manufactured using fully insulated polyurethane injected panels – technology which is continually being enhanced. This technology allows temperatures to be effectively controlled and noise to be significantly reduced, allowing its occupants to enjoy the benefits of a comfortable living environment.