Technicrete celebrating half century this year

Technicrete celebrating half century this year 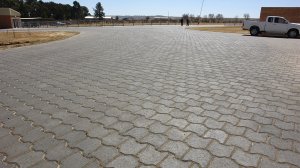 Over the last 50 years, Technicrete has grown operationally as well as through its product offering. From small beginnings to the construction of Technicrete’s first major plant in Randfontein, the establishment of nine other national manufacturing facilities followed.

The product range too has expanded from Deckwerk blocks to a catalogue that offers a complete range of precast concrete pavers, kerbs, erosion protection systems, drainage, retaining walls and concrete masonry solutions that has applications for both commercial and residential developments.

Technicrete was originally part of the construction firm Concor Group established in 1948 by Jurgen Schultz, who, in 1968, saw a gap in the market for the manufacture and application of precast concrete products. The group formed Concor Technicrete as a new division that would focus totally on the new range of precast offerings.

Schultz obtained exclusive rights to manufacture Deckwerk blocks in South Africa, which were used in the successful construction of the Magoebaskloof, Fanie Botha and Bloemhof dams, all of which were lined with the purpose designed blocks from Technicrete.

Following this success, Concor received a contract to line a canal from the Kukane river in then Ovamboland (now Northern Namibia) to Oshakati. Fifty years and thousands of projects later, is what they call Technicrete history.

In 2006, Concor was acquired by engineering company Murray & Roberts and Concor Technicrete became an independent company within the group. This resulted in the name change to simply Technicrete.

“The Technicrete brand is iconic in South and Southern Africa. It is known for quality products that have been manufactured using the latest available technologies backed up by a superior plant workforce and sales team. To celebrate Technicrete’s fiftieth birthday is a major milestone in our history as a company and in my role as its CEO,” says Weber.

Weber adds that he is proud of how Technicrete is still considered a preferred supplier to most commercial and residential projects of all dimensions, and how it has grown to meet the often-stringent requirements of South Africa’s ever-changing times.

Technicrete believes that people are at the core of its success. Without its commitment to its brand and customers, Technicrete would not be here 50 years on. “It is our people who live our core values that embrace care, respect, integrity, accountability and commitment to the delivery of quality products and services,” says Weber.

Technicrete is committed not only to the continued upskilling of its own staff, but also to the upliftment of local workforces through knowledge transfer in areas where it supplies or manufactures its products. “We wish to make a meaningful contribution to the infrastructure and people of this country,” adds Weber.

Technicrete operates a STOP.THINK philosophy and commits itself to providing a safe and healthy environment for its employees with an objective of ‘Zero Harm’ at all its sites.

As well as its policies on safety, Technicrete is an ardent member of the Concrete Manufacturers Association in South Africa and adheres to the ISO 9001:2015 Quality Management System.

From major civils projects to medical facilities and universities; residential upgrades to upmarket residential estates; motor vehicle dealerships to large commercial buildings and shopping complexes; and infrastructural projects to health clubs, Technicrete has been involved for 50 years in projects around South and Southern Africa.

In 1978, the Aggeneys mining township was established in the Northern Cape. “The Technicrete Zig Zag Block Pavers are still there in good working order nearly 40 years later – that’s good quality product for you,” boasts Weber.

Technicrete will continue to play a major role in the supply of precast concrete products as infrastructure around the country continues to be upgraded.

“Private-sector commercial and residential property developments still reflect as a growth industry and I believe our service, competitive pricing and product quality will continue to give us the edge, making us a preferred supplier for at least the next 50 years,” Weber concludes.